This tutorial introduces the basics of creating scripts in Core, using the Lua Programming Language. You do not need to know how to program to start this tutorial. If you are interested in a basic overview of programming concepts, our Scripting Introduction is a great place to start.

In the first part of a tutorial, you will create and run your first script, following the programming tradition of making a "Hello, World!" script to introduce yourself to to a new language.

In the second part, you will learn how to take an existing template in Core and use scripts to change it, by importing a bedroom scene into your project, and making a light switch that illuminates it.

About Lua and Core

Core uses the Lua programming language, which has the advantage of being beginner-friendly but suitable for advanced programming projects.

Part One: Creating Your First Script

In the Core Launcher, use the Create menu to create a new empty project. You can name this project Lua Tutorial, or whatever you like.

Open up the editor and click the Create Script

button in the toolbar at the top left of the editor. 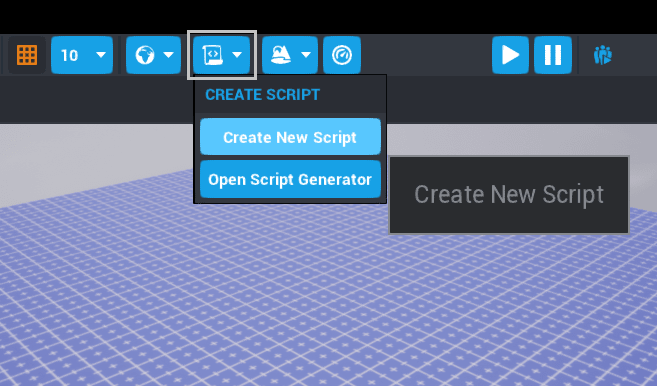 Name it TutorialScript for now.

You can rename scripts by clicking on the name of the script in the Hierarchy and F2.

Open the Script for Editing

Your new script will appear in the Project Content window, in the My Scripts section. Double click TutorialScript to open the Script Editor

You can also configure Core to open in an external editor instead of the built-in editor. See the editor integrations page to learn more.

Type the text below into your new empty script:

Now we have created a simple script! However, we need to actually add it to our game for it to do the code we wrote.

The function UI.PrintToScreen(string) writes whatever is between () in "" on the screen of your game. This is one of many of the built-in Core API functions.

Review: Creating and Running a Script

In programming, a function is a named section of a script that performs a procedure.

For each item you want to slice for the sandwich, you would have to type out that whole list each time! That would mean repeating all of these steps for the tomatoes, cheese, pickles, and other sandwich ingredients. If you made a function instead, you could just type SliceObject(tomato) to do all those steps.

In order to be able to perform our task exactly when and how we want to, we're going to change TutorialScript to use a function to say "Hello, World!"

To put UI.PrintToScreen line is within a function, make a new function called Init.

Putting -- at the beginning of a line makes that line a comment, which means it is ignored by the computer. Comments are used to help humans understand what a piece of code is doing.

If you save and run this code, nothing will happen.

The code you added defined the function, telling the computer that there is a process called Init, and UI.PrintToScreen("Hello from a function") is what it should do when it is time to do this process.

To make Init run, you need to call it. You can do this multiple times, or in many different points in a script.

To call a function, use its name and () on a separate line:

Now if you save and run this, you'll see your message appear on the screen! Excellent.

Lua requires functions to be declared on a line before any line that calls them. To keep this organized, we will put all function declarations at the top of the script, and calls further down.

Review: Creating and Using a Function

You can now delete the TutorialScript from your project Hierarchy. The contents of the script will be saved, but it will no longer run when the game preview starts.

In the next part of this tutorial, you will put your knowledge to the test!

Start on Part Two: Lightbulb now to learn more about moving and changing objects in with Lua!