The Core Editor has a dedicated Performance Window to diagnose performance issues at game creation time, including running the game in Multiplayer Preview mode to simulate client-server scenarios.

But games and especially multiplayer games are beasts of a complicated nature, and it is often much more helpful to have some view into diagnostics with real clients connected to a real server, and see how the same game actually performs on a variety of machines under different gameplay scenarios.

With this in mind, we have introduced a Profiler for published games which can be enabled by game creators and activated by any client playing a published version of that game build.

Check the "Enable Play Mode Profiler" option under the Game Settings object in scene and Publish the Game when you are ready. 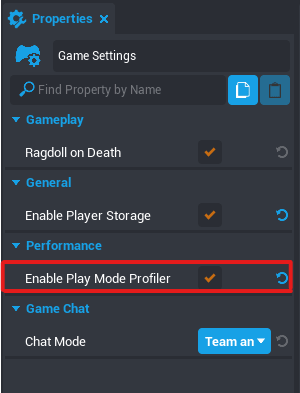 Any player playing this version of the published build will have access to the Profiler.

The Profiler has a tabbed design with a tab each for Client profiling, Server profiling and Logs.

This tab allows you access to performance data from the client-side of the running game. It shows detailed timing data captured on both the Game thread and Render thread, as well as counters for various resources in the game.

This shows performance data for the server instance that the game is connected to.

Some notes to keep in mind:

This has sections for showing the Client Logs and Server Logs.

Note that this only shows the logs that are printed using print() statements in lua scripts. It also shows warning and errors in lua scripts, if any.

This can be useful for helping to debug your game on a live server.

Player is Creator of Game being played

Server-side profiling is only available for the creator of the game being played.

When the creator joins one of his profiling-enabled games in play-mode and activates the profiler, they will be able to see and access all 3 tabs (Client, Server, Logs) with the Logs tab able to see both the Client and Server logs.

Player is Not a Creator of Game being played

Other players (non-game creators) who are playing a game published with profiling enabled, will only see Client and Logs tab with only the 'Client Logs' section visible.

That's also the view users will get when playing a game locally, since the game is not connected to a live server instance.

Underlying Threaded Architecture and how it relates to the Profiler View

Game Thread Time (CPU): All the processing logic in the main game loop happens on this thread, including animation, physics, scripts, transforms and UI updates among other things. The time shown reflects the time taken by the current frame to perform all these activities.

Render Thread Time (CPU): This thread is responsible for mainly figuring out what needs to be rendered, and setting up things that will be needed by the renderer before enqueueing these render commands into the renderer"s command list. The time shown essentially reflects this along with the time taken to move data from the CPU to the GPU.

GPU Time: The actual rendering happens on the GPU and the time measures how long the video card takes to render the scene.

Everything for a frame is first processed by the Game Thread. The results are passed to the Render Thread for submission to the GPU. Finally, the GPU renders the image. This pipeline means that there is a time overlap when processing different frames on different threads, as shown in this image:

The Timers section is broken down into stats grouped by the Thread type.

A couple of points to note: